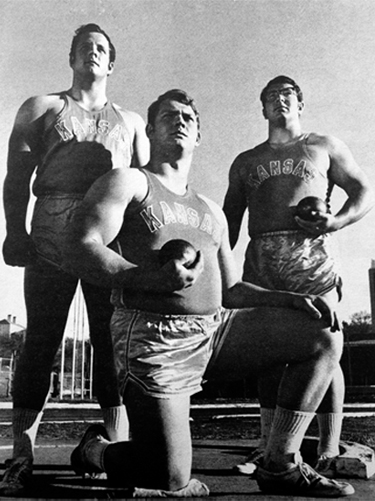 The Top Three By A Long Shot 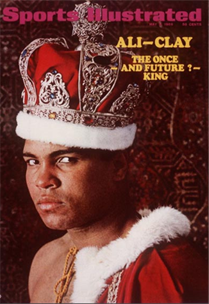 Among other weighty accomplishments, the University of Kansas is the first school ever to field three 60-foot shotputters-795 pounds worth, splendidly clad in fluorescent-pink track pants and powder-blue jerseys-at the same time. It is also quite likely that Kansas is the first school ever to have three athletes who finished one-two-three in the shot and one-three-four in the discus after breakfasting on fried chicken and chocolate cake.

In both instances the mighty pioneers were Karl Salb, Steve Wilhelm and Doug Knop, and their collective achievements this season are so remarkable it seems a shame that Coach Bob Timmons gives them only slightly more meal money than he gives Jim Ryun, who can get well nourished standing over a pot of stew and inhaling deeply. Salb, Wilhelm and Knop swept the shotput in every indoor meet they entered, including NCAA championship; outdoors they were one-two-three in both the Texas and Kansas Relays. UCLA’s best man put the shot 62’10 1/4″ against them in a dual meet and finished third. At Texas, Knop broke Olympic champion Al Oerter’s school discus record with a throw of 189’8 1/2″. And last Saturday, in a heavy rain at the Drake Relays in Des Moines, with the ring as slippery as a frozen pond, the trio swept the shot for the third straight week.

All three weigh 260 or more, are of German extraction and have colossal appetites, but they are dissimilar in several small respects. For one, they use different shots. Wilhelm has a shot of American manufacture given to him by his older brother, Bruce (whom readers of the fine print in Track & Field News will recognize as the world record holder in putting the shot left-handed-64’6″). Salb uses a German make, and Knop has an exceptionally smooth model from England (his disk costs $35 and is made in Paris).

Knop is the best discus thrower, Salb the best shotputter and Wilhelm the best weight lifter. Wilhelm, who usually finishes second to Salb in the shot, also happens to be the best grunter. When he releases the shot he lets out a combination roar-snarl-grunt that has been known to obliterate the report of the starter’s pistol.

Wilhelm doesn’t care for his runner-up role, however. He’s pleased that Kansas sweeps the shot most of the time, but he wants to be No. 1. “I wanted to get away from California,” he says, referring to his home. “I was kind of tired of following in my brother’s footsteps. I want to be first. I’ve had to fight being in the shadows a lot-my brother and now this. People have called me Avis and I don’t like being tagged as anything. I want to get the good distances. I want to throw far.”

Wilhelm has beaten Salb a few times, most notably by two feet in the Texas Relays after the chicken-and-chocolate-cake breakfast. As the three of them were leaving the stadium in Austin that day, Steve and Doug needled Karl as follows:

“Say,” said Knop, who had won the discus, “I think my Texas Relays watch is a little off. What does yours say, Steve?”

It was just retribution for Salb’s constant pranks. One night he turned out all the lights in the dorm save one, which he shone on Wilhelm’s bed, and then he opened all the windows. When Steve came in he found every bug in Kansas and half of Missouri had taken up residence on his blanket. He responded by putting Lavoris in Karl’s nasal spray.

Nonetheless, Salb and Wilhelm were tickled pink (presumably Kansas fluorescent pink) when Knop, who considers the shot just a diversion while he courts Debbie Blattner (Sportscaster Buddy Blattner’s daughter) and works toward winning the NCAA discus title, first cleared 60 feet in the shot at the NCAA Indoors in Detroit.

Timmons had to petition to let Knop put the shot at Detroit, because the NCAA only allows two men per event from any one school. This was unfair to Doug, because he had been consistently over the 55-foot qualifying standard and had been beaten only by Karl and Steve.

For a while Timmons toyed with the idea of splitting up the trio last weekend, sending one to the Penn Relays, one to the Colorado Relays and one to Drake, in the hope that they could win six titles. “But we’ve been a team all year, and I just couldn’t do it,” Timmons said. “Whenever I think of them, I think of them together. They get on real well together, but they compete hard. They don’t give in.”

So all three were on the long bus ride from Lawrence, Kans.to Des Moines last Tuesday, sitting by themselves because of their shoulders. They stoked up on a big breakfast Friday morning before the discus competition-eggs, toast, French toast, bacon, orange juice, sausage and, for Wilhelm and Salb, great chunks of pecan pie for dessert.

Knop had been psyched all week about meeting Oregon State’s Tim Vollmer, and perhaps he was too tense. He barely fouled with his heel on his first throw, threw out of bounds on his second and was so careful and slow across the ring on his third that he didn’t get any distance and failed to make the finals. Vollmer won, with a throw of 187’1″, Salb took second and Wilhelm was sixth. Knop was so disappointed at not reaching the discus finals for the first time in his life that he stayed after everyone had gone home and took 15 practice throws, none under 180 feet.

Nobody was expected to beat the Kansas trio in the shot, even in the rain, and nobody did. Salb, using the same muddy towel to dry his shot and his neck, won with a toss of 62’1/2″, Wilhelm was second at 59’5″ and Knop third at 59’2″.

Shotputting is not, by a long shot, Salb’s only athletic accomplishment. Last fall he played for the Jayhawks’ seventh-ranked football team as a defensive tackle. Since he had been at South Lake Tahoe trying to make the Olympic team (he finished fourth in the shot, barely missing the trip to Mexico), he didn’t go out for football until the Tuesday before the opener against Illinois and didn’t put on pads until Wednesday. He played that Saturday at middle guard, defensive end and defensive tackle, and was a starter by the fourth game.

Salb the Slab quickly made a name for himself at KU, but that’s nothing compared to his impact on Crossett, Ark. (pop. 5,548), his home town in the dense forests near the Louisiana border. He played defensive tackle for the state AA champion Crossett High Eagles, set a state record in the discus and a national mark (69’6″) in the 12-pound shot.

The U.S. record was made at the Golden West Invitational in California, and when Salb got home the little paper-mill town of Crossett organized a Karl Salb Day, with a parade, a barbecue, T shirts that read KARL SALB and such distinguished guests as Lieut. Governor Footsie Britt and Kansas Coach Timmons, who just happened to be passing through Crossett. ( Frank Broyles had tried and failed to get him for Arkansas. “I don’t think the family ever felt a part of Arkansas,” he says. “They’d come from Indiana.”)

“I felt kind of dumb riding down the main street on the back seat of a convertible,” said Karl.

He felt even dumber when a Miss America contestant from El Dorado, Ark. made him get up at the barbecue and sing I’m in Love with You, Honey with her. Mildred Salb, who had once lovingly prepared two meals nightly for her growing son, has a recording of this duet in her collection of Salbiana, which also includes a silver cup designating her son Arkansas’ Amateur Athlete of 1967 and his high school shot enshrined on an engraved bronze base.

Salb already had signed a letter of intent with Kansas when he went to the Golden West meet. Wilhelm, one of California’s finest schoolboy shotputters, was there and finished a strong second. The Kansas coaching staff had been trying to snare Steve, and the appeal of training and competing with Salb every day was the clincher that sent him to the Midwest.

As freshmen, Salb and Wilhelm roomed together in a dorm and pledged the same fraternity, Sigma Nu. There is a possibility Steve will join Karl in the defensive line, too. Wilhelm never played high school football because his father wouldn’t allow it. He went out for water polo instead and was an excellent wrestler. Finally, on his most recent vacation at home, he convinced his dad to let him try out. Timmons, no doubt envisioning two-thirds of his triumvirate being hurt in some Saturday afternoon pileup, was not enthused but didn’t forbid it.

“I’m pretty serious about making the team,” says Steve. “A lot of people think I’m being pressured into it because Salb went out, but it’s not that at all. It haunted me all through high school that I couldn’t play.”

Despite Salb’s football and Wilhelm’s wrestling and weight lifting, Knop is probably the best all-round athlete of the three. He wasn’t a tackle or even a lineman on the Olathe Kans.) High football team. He was the quarterback, and a good enough one to get a football grant-in-aid at Kansas. He played tight end as a freshman, was redshirted as a sophomore and then decided to concentrate on the discus. He was a three-year starter on his high school basketball team and still can stuff. He pitched for an American Legion baseball team three years, and the Kansas volleyball team wanted him because he can spike the ball through a brick wall (unfortunately, the volleyball and track seasons overlap).

Last year, after the UCLA dual meet in the Los Angeles Coliseum, a group of Kansas athletes walked out of the stadium and heard screams for help from the adjacent swimming pool. A girl who had sneaked into the enclosed pool area with some friends was floating face down in the water. The Kansans scaled the wire fence and dragged her out, and Knop saved her life with mouth-to-mouth resuscitation. The following week he won the discus event at the Texas Relays, and such back-to-back heroism was too much for Coach Timmons.

Said Knop, “Who does he throw for, coach?”