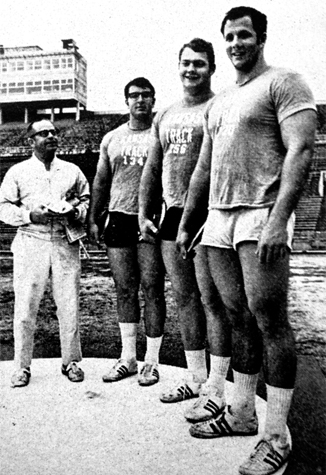 Coach Bob Timmons of Kansas University had long lived in the shadow of his brilliant pupil, world record miler Jim Ryun. He vainly spent hours trying to convince meet promoters, newspapermen and university officials that he had more than a one-man team. His requests for an all-weather track were turned down repeatedly by the athletic department and his discus-throwing area was converted into a parking lot. Because funds were limited, his team would fly in the middle of the night to take advantage of student stand-by rates. He often became so depressed that he seriously considered going back to Wichita East High School, where he had become famous as Ryun’s coach. Timmons, however, never did leave Kansas; he said he was going to win a national title first.

Not since 1961 has any team besides Southern California, Oregon or UCLA April 28, 1969 won the National Collegiate Athletic Association outdoor meet. But now Kansas is the early favorite to take the title away from the West Coast. Timmons has quietly built Kansas into a well-rounded squad that includes fast sprinters from California and New York, a pole vaulter who cleared 16 feet in high school, a trio of brawny shot-putters who can all throw 60 feet-as well as Ryun, America’s best middle-distance runner. Kansas has already won the NCAA indoor title, beaten powerful UCLA by 28 points in a dual meet, and performed spectacularly in the Texas and Kansas Relays. “This is our year,” says Timmons.

Star: Ryun, of course, is still the team’s star. Running easily and without intense pressure for the first time, Jim is enjoying competing against individuals rather than against self-imposed goals. Despite blisters and knee and kidney troubles that have affected his training, he won the mile at the NCAA indoors last month and has already run the 880 in a quick 1:46:8. “The only real pressure on me now is schoolwork,” he says. “But in a way I’m sure I am a senior. It’s been more fun working out with this team than any since I have been at Kansas.”

Three of the big reasons for the new spirit are Karl Salb, Steve Wilhelm and Doug Knop. They took the first three places in the NCAA indoor shot, and all three are also proficient in the discus. Salb, a sophomore from Crossett, Ark., is the largest and the best. Weighing 275 pounds, he tosses the shot over 66 feet, lifts 625 pounds in the weights for exercise and spends his autumn on the football field. Wilhelm, a sophomore from Los Altos, Calif., has put the shot 63 feet and plans to put his 260 pounds on the gridiron with Salb next season. Knop, a junior from Olathe, Kans., weighed only 185 when he came to Kansas but a daily diet of hamburgers, potato chips, french fries and milk pushed him up to 265. He has put the shot 60 feet and thrown the discus more than 189 feet.

The three weight men are good friends, but competition creates certain strains. On the day of a meet, they rarely speak to one another. And two weeks ago, when Wilhelm upset Salb in the shotput and Knop won the discus, the two winners needled Salb all the way home in the plane, flaunting their victory time. When they landed Salb stormed off the plane in a sulk.

Honesty: Ryun’s fame has aided in attracting such athletes to Kansas, but much of the credit must go to Timmons, 44, who charms parents and athletes with what his Kansas neighbors call “farmland honesty.” Says one rival coach: “He comes on like this pleasant little innocent guy, but all the time he’s thinking and plotting. He’d be dangerous if he wasn’t so honest.”

Timmons, who came to Kansas one year before Ryun, has established a broad nationwide recruiting network, with the help of assistant coach John Mitchell, whom he hired from a California high school-largely to get better pipeline to the richest track region of all. Only eighteen members of the current 42-man team are from Kansas. Sprinter Mickey Mathews- who ran a 9.3 wind-aided 100 last spring -and 16-foot 6-inch pole vaulter Bob Steinhoff head a corps of Californians. Junior 220-yard-man Julio Meade was lured from New York City. In his quiet way, Timmons has become known as one of the sport’s more tireless recruiters. UCLA coach Jim Bush cracked recently: “I can hardly walk down a California street without running into Timmons or Mitchell.”

Demanding: Timmons, dubbed “The Rat” because he is only 5 feet 4, is a stickler for rules. He allows no smoking or drinking, and demands that his team be well-groomed, well-dressed and clean-shaven. Once when a javelin thrower casually admitted having few beers- during the off season-Timmons kicked him off the squad. Last spring his clean-shaven rule provoked a clash with black athletes. When they convinced him that mustaches were important to their feelings of dignity, he made a strange exception: black trackmen could wear them, whites still could not.

Before the indoor NCAA championships, he made his three shot-putters shave their sideburns. “A darned shame,” said Wilhelm. “They were just beginning to look neat.” The three athletes consented, swept the meet, then staged a kind of comic protest by picking up Timmons and holding him against the ceiling of their hotel room. At Kansas these days, the sky’s the limit.