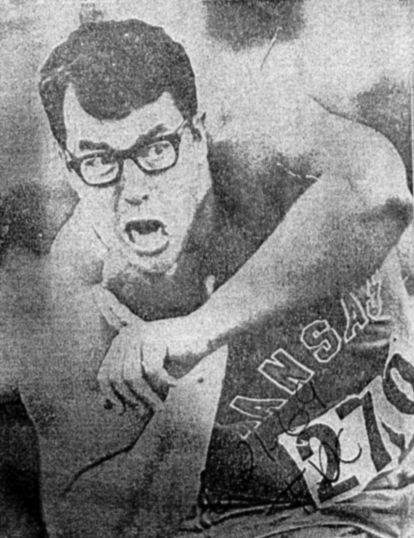 KNOXVILLE, Tenn. – The University of Kansas began stacking points like rungs on a ladder Friday afternoon as the Jayhawks climbed toward the NCAA Track and Field Championship.

Kansas, led by the one-two finish of Karl Salb and Steve Wilhelm in the shot put, amassed 30 points in the three events. San Jose State finished the day with 16 points after a one-three finish in the 100-yard dash. Oregon State had 20 and Villanova 17.

A crowd of 5,100 watched at the University of Tennessee’s Tartan track. Hot 84-degree temperatures were replaced by a hail and rain storm just as the day’s last event was completed.

Besides the Salb-Wilhelm blitz, the Jayhawks received a second-place finish from Stan Whitley in the long jump and a fourth place from George Byers in the 120-yard high hurdles.

“I was just running out there,” said the senior track captain. “I wasn’t concentrating on form. I never had a race that meant so much to me before.”

Byer was beaten by the 13.3 by Villinova’s Erv Hall and Richmond Flowers of Tennessee.

TWO MEET records fell Friday. Lee Evans of San Jose State blazed around the Tartan track in 45.4 as the fastest 440-yard dash qualifier. Old record was 45.7. It took 45.9 or better to qualify for the finals.

The other record came in the 3,000-meter steeplechase Oregon State’s Jim Berkley held off a closing rush by Oregon’s Steve Savage and Villanova’s Tom Donally to win in 8:44.4 Old record was 8:48.6.

John Carlos led San Jose’s bid with a winning time of 9.2 in the 100, Ronnie Ray Smit was third for the Spartans in 9.3.

Previous KU qualifiers for the Saturday’s finals include Jim Ryun in the mile and three mile and Jan Johnson in the pole vault. Julio Meade is in the 220-yard dash semifinals. Hence, KU’s 30 points are supplemented by nine finalists and one semifinalist in Saturday’s final round.

So, it would appear the Lawrence legions are well on the way to their first NCAA championship since 1960 and their third ever.

Salb and Wilhelm combined for 18 points with their sweep in the shot. Salb’s winning heave covered 64 feet, 9 inches, while Wilhelm got 63-6 1/4.

Neither of the heavyweight sophomores felt much like chiding the other although Salb admitted, “if Steve had gotten a 65, I probably could have gone a little farther.”

Wilhelm said he wasn’t satisfied with being second but added, “That’s the least Karl has beaten me by in a long time.” The 63-6 1/4 was Steve’s all-time best.

WHITLEY AND BYERS performed exceptionally well. Although he was boosted by a 12.3-mile wind, Whitley uncorked a leap of 26-7 3/4 which was the farthest he’s ever sailed. He was beaten, however, by Redlands’ Jerry Proctor who hit the jump board and came down 26 feet, 11 3/4 inches later. Proctor was aided by a 6.7 mile wind, which ruled out his chance for a record.

Byers got four points KU wasn’t banking on. Byers toppled over three hurdles, but still equaled his all-time best of 13.6.

KU’s Mickey Mathews narrowly missed making the finals when he ran 9.4 in the semis. That was only good for fifth in his heat Ron Jessie also missed the finals in the 120-yard high hurdles, although he equaled his all-time best of 13.8.

Kansas State Ken Swenson and Doug Lane also failed to make the finals. Swenson looked like he was in until the last few strides when he was passed by Craig Endicott of Missouri and Pat Collins of Notre Dame… all three runners were clocked in 1:48.7.

The finals in 13 events are scheduled for Saturday afternoon.